Home > Industry News > All News > Advocating for Equality With Every Dish

Advocating for Equality With Every Dish

Only open on the weekends, Epilogue Kitchen & Cocktails serves up a variety of food such as crab cakes, fried eggplant, and burgers with their handmade bread-and-butter pickles, but their meals also come with a side of literature.

Based in Salem, owners Jonathan Jones and Maura Ryan have used their restaurant space to uplift, educate and feed many people that have walked through their door or ordered online.

When their restaurant closed due to COVID-19, and the death of George Floyd reignited the global Black Lives Matter (BLM) movement, Jones and his wife decided to devote their time to starting a library filled with Black literature to help educate others on racism and fascism, in an effort to provide something more than food to the community.

“The main reason we started it was to level the playing field in terms of knowledge base and to bring some of that cultural knowledge to a bunch of folks who had no real reason to have it prior to that,” Jones says. “If we’re going to try to move forward, we all need to have a more common understanding of where we’re coming from.”

Jones and Ryan filled the library mostly with books they already owned but quickly received book donations from community members. Soon the library shelved books such as The City We Became by science-fiction writer N.K. Jemisin; Beloved by Toni Morrison; textbooks on race relations, civil wars, apartheid; Americana novels; Afro-futurism; and even a kids section.

As the restaurant became a hub to help bring knowledge inspired by the BLM movement, it also became a refuge for those displaced and unsheltered due to the 2020 Oregon wildfires — in part to help those in need, but also to fight against misinformation about what the BLM protests actually stood for.

“My wife and I feel very privileged to have a business and to operate it here, and when the community that allows us to operate is harmed or something has happened to them, and we have any ability to help, then it’s our duty to do that,” Jones says.

Jones and Ryan turned the restaurant into a food center where they put together sack lunches, hand sanitizer and masks to hand out to the unsheltered community. For those who were without homes, they opened up their menu at no cost to provide comfort for whoever needed it.

“That was our little part. We couldn’t do a lot but we could do that,” Jones says.

“I think it’s important to note just how much work continues to be done and how many members continue to do the positive work in the face of pretty horrible behavior.”

This story is part of Travel Oregon’s Industry Spotlight series. 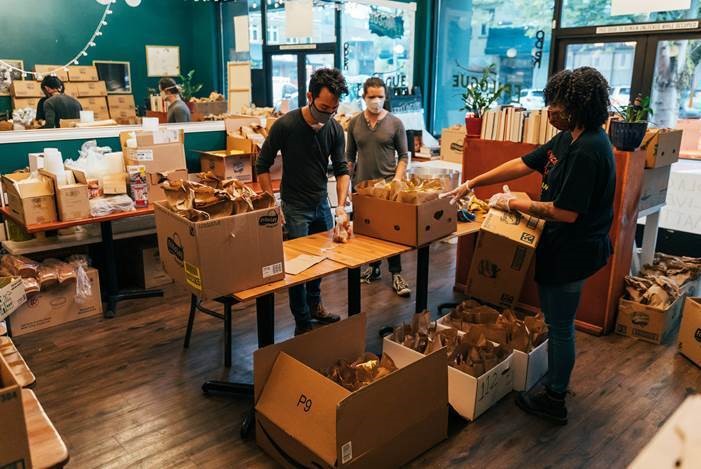