Behind the Scenes of “Extraordinary is Ordinary”

After travel grinds to a halt for two years during COVID-19, how do you bounce back?

Travel Oregon wanted to remind visitors and residents of all that is extraordinary in the state by getting back to its roots – quite literally. “Extraordinary is Ordinary,” which launched in early July 2022, offers a whimsical take on three ubiquitous elements in Oregon — rocks, water and soil.

“We’d done ‘Only Slightly Exaggerated’ for three years, showing the landscapes, all animated,” says Megan Riehl, Wieden + Kennedy brand director. “What we missed was some of the reality.” The result: A year-long effort to create three short videos that showcase multiple styles of studio magic – all inspired by real-life locations in Oregon’s seven regions.

Here’s a peek at how it all came together – and you just might be inspired to watch it again and again to catch the many layers.

One of the elements of creative artistry for Extraordinary is Ordinary was the live-action footage of Oregon as well as the filming of “real” people and flora and fauna layered into the mixed-media scenes,  says Kyler Spickler, Wieden + Kennedy brand manager. The family of hikers walking through the Malheur National Forest was also shot on a studio set with real people and trees brought in.

The second – and most visible — layer of the videos utilizes the fun and magic of old-school animation techniques like puppetry, Claymation and stop-motion animation. (Fun fact: Claymation originated in Portland at the former Will Vinton Studios, as you might remember from the California Raisins’ iconic “Heard it from the Grapevine.” The Portland Region continues to be a global leader in animation, with Laika Studios based in Hillsboro.)

Some of the stop-motion and puppet scenes, like the Timberline Lodge scene with the snowboarder doing a flip , took a full day, Spickler says. A 12-hour shoot typically results in about 3 seconds of footage. Dozens of animators – some of which did previous work on Wes Anderson films — did this painstaking work to bring the Claymation and miniature figures to life.

“It was so special seeing the attention to detail and care they put into each puppet’s movement and the details on each set we created,” says Nick Stokes, Wieden + Kennedy creative director. “The entire production team and animators were just as excited and passionate about this project as we were, which was also really special to see.”

Homegrown brands are represented in several of the scenes  including Trew Gear, Columbia and Pendleton. The bowl of ramen is based on the signature dish at Portland’s Afuri restaurant, and the beer is an actual beer from Beaverton’s

Finally, the last layer of the creative is the digitally painted sets – called “matte paintings” in TV/film productions, as producers use them for set design. The internationally recognized artist behind the work is Simone De Salvatore, who has worked on many of the matte paintings seen in shows like “Game of Thrones” and in Wes Anderson films like “Grand Budapest Hotel,” which won an Oscar in 2015 for best production design.

The geography featured in these swoon-worthy matte paintings ties back to the extraordinary locations this campaign chose to feature. The “Rocks” end card features the iconic peaks of Mt. Hood and Mt. Jefferson, two of the three peaks of the Three Sisters, Timberline Lodge and the awe-inspiring Blue Basin area of the John Day Fossil Beds.

The “Soil” end card paints an idyllic sunset-toned compilation of Eastern Oregon’s Carman Ranch and Wallowa Mountains along with Marys Peak on the Coast Range, Analemma Wines in the Columbia River Gorge and Detering Orchards in the Willamette Valley.

Finally, the “Water” end card is perhaps the most dramatic of all, showing the artist’s view of the tag line “There’s water all around.” Several of Portland’s iconic bridges take center stage, but look closer and you’ll see that Mt. Hood, Paulina Falls, Crater Lake, the Willamette Valley and the Rogue River also appear in the background.

If you’re a fan of beautiful font types, Brett Stenson is a local Portland artist and designer who created the custom “Extraordinary is Ordinary” type lockup. “We felt lucky to work with him, and even luckier to collaborate with an Oregonian,” Stokes says.

Copies of the three Extraordinary is Ordinary end-card scenes as postcards and posters are available to the public at Travel Oregon Welcome Centers across the state, in Ashland, Portland, Oregon City, Seaside, Brookings, Ontario and Klamath Falls. 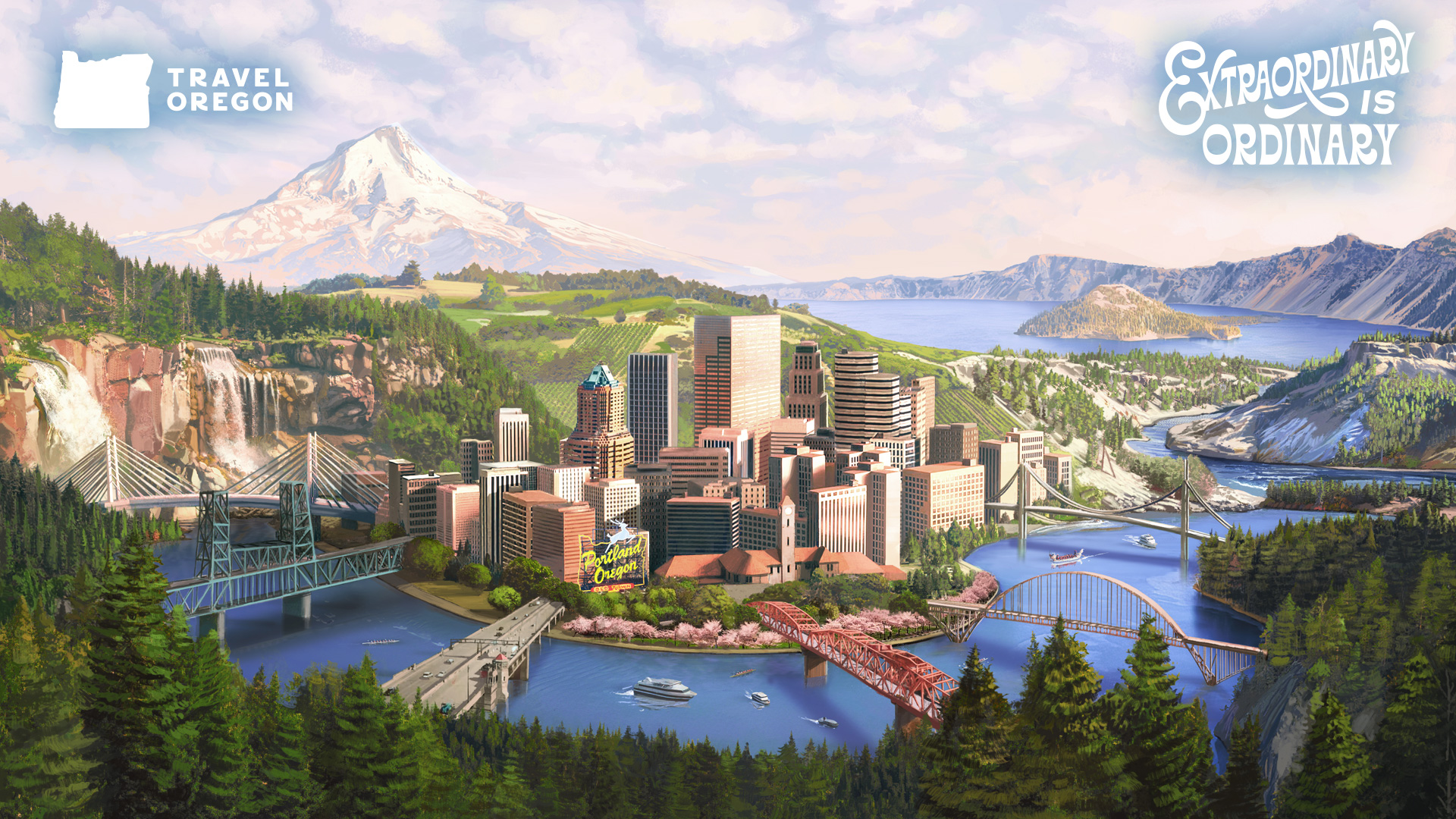